Making sense of pain through science and stories. Bridging the gap between patients and health professionals.
Home » Injury Rehabilitation for Tactical Athletes – We Need to do More 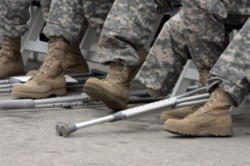 This article  on injury rehabilitation for tactical athletes was originally posted at National Tactical Fitness.

You get the pattern. So why is that? Why is it that when a tactical athlete gets hurt, they are WAY more likely to get hurt again when back to work or sport? Is it because the human body isn’t physically capable of fully recovering? Or is it because our current method for rehabilitating injuries is inadequate? I don’t have a definitive answer but I’m leaning toward the latter.

When an athlete injures a body part, the body part wasn’t working in isolation, it was working as a part of an integrated system. So why do we rehabilitate injuries by isolating the part from the system?

As a medically retired firefighter, one who had to leave a career I loved before I was ready to because of injury and surgery, I know firsthand how much goes unaddressed with traditional forms of injury rehabilitation in athletes, particularly for those in the amateur and tactical ranks. The traditional methods are very limited, viewing the restoration of function as being accomplished by isolating a body part, and the joint above and below for good measure, rather than looking at the whole person. It’s all biomechanical and degrees and passive ROM lying on a table that are checked against tables to determine when rehab has been successful. It’s not enough neurological, psychological, and whole person – biopsychological, psychophysiological, psychosomatic – there are a number of terms that describe the interplay between the CNS, the mind (which is different from the brain/CNS), and the body.

Now, I’m not saying all PTs don’t look at the whole person and tackle the CNS and the body in their programs with hands-on techniques for fascial release and proprioceptive neuromuscular facilitation (among many other methods). And there are a great deal of great PTs out there that do look at the entire kinetic chain and dynamic movements in their determination of when function is fully restored, rather than solely at the injured body part. But rehab professionals are limited to a set number of visits in which there is only so much they can get done. And within that short amount of time, many are great on the movement side. But the psychological components that lead to a greater ease of rehabilitation and sustained, optimal outcomes are not within their scope, in most cases, and the mind never gets addressed.

The traditional model of injury rehabilitation doesn’t look at the body and brain as a complex, integrated system that is injured as a system and must be rehabilitated as a system. From dysfunctional neuro-motor signaling that contributes to persistent pain responses and guarding long after the injury is healed to dysfunctional motor-neuro signaling that leads to wonky propioception and self-awareness. The brain and body can’t be separated; glitches in the neuro-motor or motor-neuro pathways lead to dysfunctional movement patterns and increased risk of pain or injury/reinjury down the line. We have to address both what the body tells the brain and what the brain tells the body.

And that’s just the foundation. That doesn’t even begin to address the mind, the psychological components that can either facilitate or limit rehabilitation. The way we think does matter. The way we feel does matter. The way we think and feel has profound effects on our ability to maximally come back from injury and attain peak performance. The mind is what sets the elite apart from the rest of the pack. And the mind can be a mess during an injury and it too often goes unaddressed. While most can still grit it out through the physical rehab and get back to the field, they will not have recovered optimally, making them prone to get hurt again. And for those that are seriously injured and out for a long time, or worse, not able to get back to the field, the mind matters even more.

There are so many things that go through an athlete’s mind when they are hurt and unable to perform their customary routines. There are the identity issues that many pro and tactical athletes face when what may have wholly defined them, their sport or their profession, has been taken away from them (even if it’s only temporary). They may lack confidence in a rehabbed body part that will alter movement patterns that can then lead to an injury somewhere else in the kinetic chain or that can lead to feelings of vulnerability, a fear of reinjury, and a lack of confidence in the field. There may be overconfidence in an anatomically changed joint that can lead to pushing beyond physical limits and getting reinjured. There’s the catastrophic or “all or none” thinking and negative self-talk that can send guys into downward spirals that delays their recovery by decreasing the ease of rehabilitation, or worse, prevents their recovery altogether. And so much more.

Every injured athlete is unique. Each will have different neurological, physiological, and psychological factors that need to be assessed and addressed to remove limiting factors and strengthen facilitative factors to optimize rehabilitation. Each will have a different path toward peak performance after an injury.

So how do we flip the paradigm? How do we optimally rehabilitate tactical athletes? I have my ideas and I’ll be sharing them with you, but I want to hear from you. Thoughts?

Newsletter Signup
For a monthly(ish) museletter with updates and links, sign up here.
©2022 MyCuppaJo.com 5.8.3 - 10.2. All Rights Reserved.
joletta.belton@gmail.com
Website Design by The Web Squad.